Life without coffee was a bleak prospect 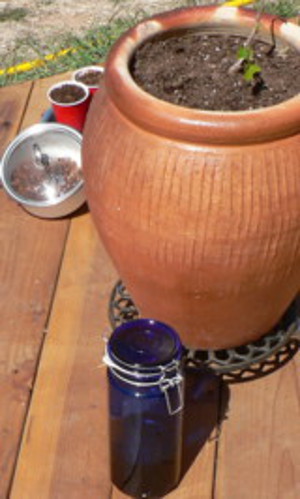 Heating beans in a white pot with a clear glass lid, and coffee in a blue glass container which I hoped was dark enough to draw more heat. That was my first day after my electricity was turned off. (I wanted to pay, but needed three days to transfer money. Back then I had money. The fellow said, NO. So I endured the long Easter weekend without heat or light. It dawned on me that I could get Solar and NOT pay them at all. After all, they could have had their money, but chose to punish me for being poor. That’s many years ago. You should have heard the surprise in their voices when they called me, repeatedly, trying to get me to pay up so I could have my electricity from them, again. Each time I said no, thanks.)

After writing letters bemoaning the fact I was without heat and light, I put my mind to making coffee. Coffee always cheers me up, and I needed a bit of cheering up.

Overall, when my heat and lights were shut off, hot food wasn’t an immediate worry because Kitchen Angels delivered a hot meal each weekday. They had begun bringing me meals when I was sick with tetanus. Although I wasn’t as sick anymore, they continued to bring me meals. That allowed me to focus on coffee as a priority, and beans for lunch.

I hoped that my blue-glass container would help the sun heat water more than clear glass would. Maybe it did, but it didn’t heat it very much. My beans, also shown in the picture, are in a pot with a clear glass lid. They were tepid, also. There is no way they would have cooked from scratch.

Would a candle do it?

I began to wonder if a candle was the answer ~ And, what could I put over the candle to set a water container on?

My first thought was the fireplace grate ~ and luckily I had a little stainless steel bowl. The picture was taken before I found a glass cover to a small sauce pan that fit perfectly.

Happiness! The water boiled ~ I had hot coffee. I would survive, and enjoy surviving.

With this success behind me, I tried to heat my bedroom with candles ~ which wasn’t quite as successful, but at least it made me feel as if I was doing something.

Few things have ever smelled as good cooking as this, my first candle cooked meal.

The candles were a gift from a lady who works in a store where the policy prohibits using a credit card over the phone.

When I told her I wanted candles for boiling water and cooking, she said all of theirs were scented, anyway, and she didn’t want me to have to use scented candles for cooking.

She brought me several candles she had at home, and wouldn’t let me pay her. One green one lasted so magically long that when it finally died I felt as if I should have a funeral for it.

Admittedly, I did not cook the meal in the picture from scratch. Kitchen Angels sent a cold meal in addition to a hot meal on Thursday or Friday, I forget which, to be used on Saturday or Sunday. So, all I really had to do was heat it up. However, the little effort on my part did not diminish my huge joy at the accomplishment.

I had discovered that candles work for cooking as well as coffee making.

Now I can easily slide my candles to different locations to heat wax or cook. It’s neat to be able to cook several different things at one time. And, I can store freshly made candles on top. I totally love this candle cooker of mine. It sits where my refrigerator used to be. I don’t use a refrigerator anymore since I cook fresh every day.