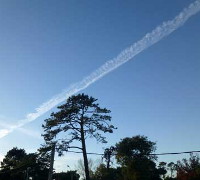 4/3/2016 ~ Some time before IRS put me out of business by enforcing for 1984, which I’d actually paid in 1985, I sold a home to a Los Alamos scientist who said he was working on weather. US News & World Report used my experience re abuse of taxpayers by the IRS in a piece they ran in 1996, so I know the scientist spoke about his job re weather before 1996.

Because government tends to be pro business, the government did not go at the problem from the perspective of lowering car emissions that might be a cause. Nor did the government want to restrict coal, oil and gas with their powerful lobbies, not to mention government subsidies.

Thus, the answer appeared to be innovation, and with that, chem trails and geo-engineering emerged, though of course it was treated as a conspiracy theory and proponents were viewed as nut jobs. 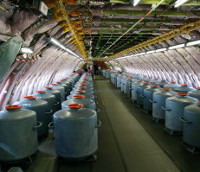 Be that as it may, there is little doubt today that geo-engineering is a fact. However, because it was initially a “secret” program much like the development of the atomic bomb at Los Alamos, labeled “The Secret City” back in the day when lights on The Hill were seen by people in Santa Fe who thus knew something was going on, there’s virtually no mainstream media coverage, despite the emergence of pictures of the interior of chem trail planes.

So, geo-engineering and its visible chem trails may well explain the dry cough I have since I’ve been sitting outside in the sunshine on sunny days. I didn’t have the cough during the winter when I stayed inside, and I’m housebound, so I didn’t catch it from anyone because I don’t encounter people here in my home, somewhat sadly, actually.

It’s possible that chem trails effect a health change only on people who are less healthy or under stress. In any case, this year when the stress from Wells Fargo and its fraudulent approach to foreclosure was hitting me hard, my dry cough was extremely bad, but only yesterday did I happen to put the planes crisscrossing the sky above me, with their white trails, together with my cough.

When I tweeted about it one of my followers mentioned KI, a supplement of Potassium and Iodide. It protects against… I’m not exactly sure, since he said the iodide ions filled up receptors so that the radiation could get in. I don’t know if that’s true. Though, I put Sea Salt in my dinner last night when it was cooking and plan to continue using Sea Salt which has Iodine content.

I also am going to take care to use cilantro capsules every day to chelate any heavy metals. I’ve been forgetting to take them because of the stress and how many supplements I’ve come to be using.

Also, for the time being I’m not going to leave my door open for “fresh air”.

My experience in years past is that the dry cough has gone away in time. So I don’t know if that means my body builds up a resistance, or that the chem trails become less concentrated as time goes by.

So, that’s my take on Chem Trails.

4/4/2016 ~ I had about 10 minutes outside this morning before a Chem Trail Plane appeared and I went back inside. I’ve noticed that since I go in shortly after Chem Trail Planes appear, that my cough has been getting vastly better.

That reminded me that during the summer I don’t sit outside in the sun once the day begins to get warm, which is pretty early, and at the same time, I haven’t had a cough during the summer.