September 28, 2008 – Santa Fe says it is shutting off my water on October 1. I have sent out the following letter. Writing the cover letters takes a long time so I’m only half way through by “copies” list. 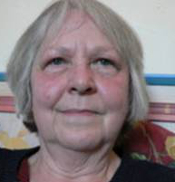 A year ago I was thirsty, went to get a drink of water, and found they had shut it off. I had said I needed two days to get the money, but they shut off my water immediately and I was without water for a day. For months after that it was hard to drink enough water – I never felt thirsty or hungry. The infection in my jaw, where I was supposed to have surgery, got bad; it was hard to type; my balance got bad, and after that I lost a lot of hair and I had many eruptions on my neck from the infection.

This time I will not fight it. All year every noise made me afraid my water was off. I’m tired of being frightened by threats to my life. I will be thirsty for awhile, but the feeling will go. I can have beautiful things in my mind even while the City of Santa Fe deprives me of water for my body.

I have $42. I will not worry about food and coffee. I will buy stamps and send many of these letters.

It seems to me that when the country is willing to spend $700,000,000,000 more to fix a bit more of the mortgage mess that professionals got us into, while ordinary Americans around the country are deprived of water, because I am not the only one: veterans are deprived, families, kids, young mothers, anyone – and that’s with no regard for life except for the pretense of Christians who pose with their Right to Life signs for media attention – there is widespread impoverishment of spirit.

I am sorry my website will end. For those who were not afraid to go beyond doctors, real and in ads, and none recommending vitamins, my website helped. http://www.health-boundaries-bite.com

I think of how IRS put me out of business as a Realtor, levying me for 1984 in 1991, despite the fact I had paid it in 1985; that made my social security low; plus IRS takes 20% of my monthly $598 and I can’t get disability despite my brain injury. I saved when I was young and well, but NM courts foreclosed and sold my condo without a hearing, wouldn’t let me redeem, and my appeals fall on deaf ears. I feel I should have compensation for damage to my health and finances from my condo being built over an old outdoor toilet pit, but NM courts wouldn’t let me bring the case. Maybe the developer is a contributor, who knows. I’ve added him to my copy list below.

September 29, 2008 — The police, officers Ortiz and Varela, just came with yellow stun gun, to tell me I could not say things like the above. They said they’d come for my welfare. When I asked what that meant they said I was threatening to harm myself. I said that was not true. I asked what happened to people who did not have water and they wouldn’t answer. So I told them what happened to me last year and I told them that if they stunned me I would probably die because my nerves are bad because I’ve been sick and my heart gives me problems. They said they were well trained. I said a man was just killed the other day. They left.

Later ~ My cousin paid my water bill. (for which I slowly but surely paid her back) Since the above letter I was given the SS I should have gotten years earlier. And, most importantly, the City finally allowed me to have the poverty level rates that people in poverty are supposed to receive.

Pages on IRS Enforcement for Year that was Paid