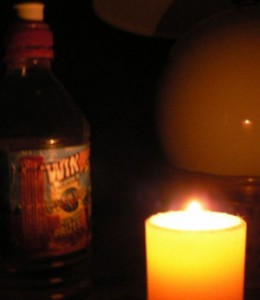 Here’s the thing, PNM threatened me all the time, anyway, and the stress was taking a toll on my health.

For some reason when I paid my electric bill with Bill Pay through Wells Fargo, PNM maintained it was not paid into the right account, that Wells Fargo was making an error.

But to me it appeared to go into an old account with a balance, so I feel sure PNM was directing where the money went.

I sent in money to pay it all…

PNM took the money and put it into “deposits” and kept threatening me as if I had not sent in money.

Every month I’d go through the same thing and end up screaming into the phone. My feeling is that they don’t try to be accurate because they rely on depriving people of heat and light to make them do things. And, of course there’s extra profit in reconnection fees.

Anyway… on San Isidro Day, patron saint of agriculture, PNM came and shut me off with no warning. None. They wouldn’t even give me two days to transfer money to pay. It was an instant end to my lights, computer, heat, electric kettle, and telephone (because of the answering machine component).

Every month I’d be so stressed.

So, on April 4, 2007 when PNM came and threatened to shut off my power unless I paid $298, I was feeling anxious to start with (because of PNM’s habitual behavior and because court things have been major stressful).

I had over $200 in my bank account because I’d thought they were going to ask for $189. (I would have sent the money in except court things were so stressful I got confused on what part of the month it was. Using Bill Pay through my bank had not been working so that was extremely stressful, rather than helpful.)

I asked for two days to transfer money

I asked the PNM fellow to give me a two days to transfer money so I’d have enough to pay the $298, but no.

For a week or more I thought he’d said he’d come back next day. I kept thinking he shut me off in retaliation after he was so unrelenting with the pressure that I said, “You fucker!”

But yesterday when I looked at the tag he filled out before I said that, I saw it was a disconnect, and he wasn’t going to give me a day. (Because of my brain injury I get confused, especially when there’s stress.)

Disconnect ~ Happily it changed my life

So, no lights or gas. But I wasn’t using gas anyway, even though I was paying a $10 monthly access fee. (My furnace broke a couple years ago, and I’d been using electric radiators.)

I couldn’t call anyone, so I wrote to PNM, Senator Bingaman, and Adult Protective Services by hand. Writing the letters made me feel less isolated.

So, that’s it, that’s how I entered my Off Grid life. It wasn’t an elegant entry, at all. In fact, it felt like a disaster. My initial reaction was to scramble frantically to get back on grid.

Luckily, it was Wednesday of Holy Week. By the time my dark, walk-in closet gave up an old phone that used no electricity it was Good Friday afternoon. There was no one at work to hear my calls for help.

What made it lucky was that I needed two more days to have enough insight to see the Blessing it was that PNM, the utility company, could no longer threaten me. I had entered a life where one of the biggest stresses I faced, no longer existed.

What surprised me was learning that cold and dark are challenges, not threats. They don’t call me up, pound on my door, or post scary notices. That is, they don’t try to scare me. They are challenges. I face them with all of my personal energy intact, rather than half of it draining away into a pool of fear that serves the utility company by making me weak and compliant.

In facing the challenges of cold and dark I gained strength and beauty as well as threatless heat and light.

This is turning out to be such a blessing. I can see why this happened on San Isidro Day: because so much good is growing out of it.

But ~~ I’ve been reading Secrets of the Soil which talks about the huge harm mass chemical fertilization and mass pesticide use do, and I think, sadly, that my grandfather was instrumental in the prominence these things took in agriculture. I know he thought he was helping to feed the world… and I know he went to countries like India, England… when I was watching the Olympic games held in Yugoslavia with him, he said he spent a day with Tito.

Nevertheless, I think mass produced food is not good for us. I know I have always thought that my Polish (maternal) grandfather lived to nearly a hundred because he ate out of his garden, while my paternal grandfather died in his sixties. As an aside, I’ve discovered some pretty amazing stuff in my garden.

All the lovely fruit in my freezer 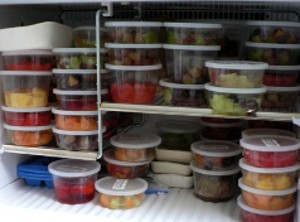 Kitchen Angels brought fruit with the meals I began getting when I had tetanus and couldn’t stand long enough to cook for myself.

Each time I put a container of fruit into my freezer I had anticipated summer and how dynamite it would be to have these frozen, healthy treats. It reminded me of when I first moved here from my condo and found that the apricot tree around the corner made tons of apricots that were falling to the sidewalk with no indication that anyone was picking any to eat.

I took a cardboard box and went round and picked so many that I was able to fill a large part of my freezer. They were great because at that time I didn’t have money and before finding them was worried about food.

I’d asked my brother, Kevin Kline, in Pennsylvania to send me $10, but he’d refused. (Too funny, actually. I used to buy him all different things that I thought would make him happy. He’s seven years younger than me so I still thought of him as I did when I used to take care of him while mom worked (Dad had deserted). I got him a nice typewriter back when typewriters were the thing, I got him all different Indian art and jewelry pieces when I moved here to New Mexico.)

Then, while I was in London and so lonely he wrote me once, exactly once in nine years. But when I came back he wrote me asking me to please list the value of the Indian things I’d sent him because he’d been burgled and he wanted to collect the insurance.

I wrote back in quite unladylike terms, basically telling him to get stuffed.

So, overall I wasn’t surprised when he said he would not send me $10. (I’m glad he lives in Mechanicsburg, not Philadelphia, otherwise the City of Brotherly Love would be ruined to me forever.)

At some later point I got him to send me $25, which he said was “It.” I never asked again.

It was heart wrenching to see all my lovely fruit go bad. Some of it looked so good, but there was mold throughout and the smell of rotting replaced the fond hopes I’d had of enjoying this bounty of fruit in the summer.

I had so looked forward to eating this fruit. What a waste! What a complete waste because PNM refused to give me two days to transfer money to pay them. 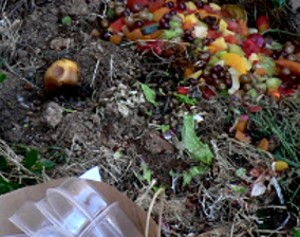 If what PNM did was about the money, they would have let me pay them in two days. But they wouldn’t, so to me, what they did was demonstrate how powerful they are.

How despicable. No one should respect a company that behaves like this and treats people like this. People should scorn this kind of abuse.

And, I’m not even mentioning how I had several stocks that I was going to sell for a profit that afternoon, after 1:00 p.m. I lost between $2,000 and $6,000 overall from that and not being able to do anything with my stocks.

And, if you are thinking of voting for Bill Richardson, think about how this happened in his state, New Mexico, and how he has done nothing to ensure rights of people with disabilities, which by virtue of reason extends to all people.

If I didn’t have a disability I wouldn’t have been confused about the dates and most likely I wouldn’t have experienced this. But I am disabled, and I did experience it. I now know all too well how the disabled are treated when their rights are not protected.