After I discovered that my water had been turned off I began writing emails.

Over the period of time my water was off and I was without water my ability to type deteriorated drastically. You can see this in the emails I wrote over the course of 24 hours. You can also see that a drink of water when Social Services brought me water, did not cure what had happened to my hand/eye coordination. Nor did I recover in a few days or weeks.

I just got my corrected revised brief in the mail yesterday
and was going to go to bed when the city came to shut off my
water.

Over the weekend I was going to bring in a plant, but I hurtmy back and now all my muscles feel the way they did when I first got tetanus and I can barely move and it’s very painful.Kathy Valdez gave me till Friday to get $163.00, and she said she doesn’t care if I don’t have water, they shut people off every day, she said.I couldn’t see how my bill could be $60 a month because I can’t take baths or showers without hot water. So I thinkthey are doing something tricky.I need help.Unless of course people are supposed to die and that’s thewhole point.I would not have these problems if my condo had not beenbuilt over a privy pit. I got tetanus because I couldn’t feelmy feet properly because of the nerve damage.

Also, I’m dizzy. I don’t know if that’s from the pain, not
taking pain killers when i don’t have a lot of water and they
are supposed to be taken with a lot o fwater.

I think three days without water, till my money transfers, is
going to be hard on my health.

I guess that doesn’t matter to the City of Santa Fe, or New Mexico.

I hae a disability. I agreed to pay on friday. Ineeded time toget the money. I need water.

pain worse without pian killres that need water for tkaing them

I couldnt’ baarlley stand long enought to feed the gold fish.,Pains much worse. I nee dawater. I laso need water to wash my aands. who can bring me some ewater?I need water. I’m thristy and I can’t think i’m so thirsty. thisis making my sidablity waorse. I nee d water.

Bobbette will purchase some bottled water for you and bring it
over to you.

I have aa ddisabliety – i hae the monetyh to pay but no owne
while help me wherww is sf ada coraro dor cor cor
coordinator?

Franciss fromthw water just `alled me andx she insisted I go
tteht the check number now even though I’m in such bad pain.

My water was off for just one day, yet months later I am not recovered. For instance, the infection in my jaw around some old dental implants flared up with pain, swelling, and a lot of hair loss. It’s over two months later and my hair loss has not halted.

Because this was my experience, I am sure that people who have their water turned off have their health affected, both mentally and physically.

One question this raises is how can a state take children from a family for things that endanger the children and at the same time allow something as endangering as deprivation of water?

Deprivation of water is pretty universally considered a torture technique.

12/14/07 Later – Once again the number of people looking at this page humbles me and again I wish I had written better.

For instance, while I showed how being without water for a day affected my typing I didn’t discuss the relationship between stress and nerve damage.

Some stress is actually good for us. It’s been humorously said that mice who are chased by cats live longer than mice not chased by cats. (Presumably assuming they aren’t caught.)

Stress we can beat, even when a lot of fast steps are needed, is the kind that makes us feel good in the end: we’re happy to have conquered, outrun, survived.

But a stress which immobilizes us, corners us, or in some other way makes us feel helpless burns out our nerves. Elissa Epel, the researcher who was able to show this in 2005, said in an interview, “We were quite taken aback to realize that stress had effects visible at the intracellular level.”

Most telling of all, and pertinent to the point I want to make here, she went on to say, “Cell aging, in turn, is a risk factor for later disease. This new work quantifies a physiological price to feeling highly stressed.”

I know from having low vitamin B12, which is common, and having regular B12 tests and keeping a “Time Line” at the suggestion of my neurologist, that when I was particularly stressed my B12 level would drop hundreds of points. My neurologist told me to have extra B12 shots at those times, but he didn’t say and I didn’t know how much replacement B12 was needed to handle the depletions caused by stress.

When people who aren’t aware of this are threatened and deprived of water in a situation where they don’t have the money or means to make the money to pay for essential water, their health is, necessarily, going to deteriorate.

Methylcobalamin, the active form of B12, offsets damage from the stress, but most people don’t know about it and doctors prescribe drugs without mention of vitamins.

On the other hand, I know about methylcobalamin and I took a lot extra to help me deal with the water deprivation and stress, and I STILL was affected for months.

That being true, I have to wonder how any candidates for government offices can talk about health care and insurance and ignore underlying causes of ill health like water deprivation and profiting from water sales at the expense of health. 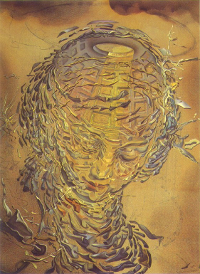 12/16/07 – I could not work on this yesterday. I felt as if Salvador Dali’s painting, Exploding Head, was happening to me because of how much there is to this issue.

On pbs’s forum Judy discussed this in terms of Global Warming, and how it’s a “good thing” people have their water turned off because it teaches the lesson of what is coming with Global Warming. That’s a very head ache making view.

Depriving people of water is not a climate change issue, it is an issue involving profit vs ethics and it calls into question the U.S. unchecked system of capitalism wherein two men have amassed most of the capital, that is, Bill Gates and Warren Buffet.

Looking back in time, between 1900 and 1940 urban death rates were reduced 15% by the introduction of chlorination and water filtration. David Cutler and Grant Miller, of Harvard, wrote in their paper, CleanWater’s Historic Effect on U.S. Mortality Rates, that having clean water cut three-quarters of U.S.infant mortality and two-thirds of child mortality. Those are the most rapid health improvements in U.S. history.

Before water filtration, city dwelling Americans died at rates 30 percent higher than those of Americans living in the country. This came to be known as the “urban penalty.”

Cutler and Miller examined death rates before and after the introduction of clean water, compared them to cities that had not initiated water treatment, and were able to conclude that clean water was largely responsible for eliminating the urban penalty.

The obvious question this raises is: If cleaning people’s water reduces deaths, then how much does depriving people of water increase the number of deaths?

Which brings me to what I had wanted to say in the beginning, “While there are countries where carrying water to meet ones needs in order to sustain life is commonplace, we in the United States have come to rely on pipes carrying water to us. We may or may not have hot, as well as cold water, but overall we generally have water provided by a system of pipes if we live in a city. In the country we may have our own well, and that is entirely aside from the questions I want to raise here.

The first question is: Do we agree that water is necessary for life?

The second question is: Do we agree that cities require large numbers of people in order to exist, and that providing for the well being of those people is a duty?

As an aside, the U.S. Census Bureau 2007 Statistical Abstract does not list water as a natural resource.

How the 2nd Threat led to Solutions