10/10/2015 ~ Update on my little Panda washer. I just easily washed a fleece blanket, single size. The blanket doesn’t fit in the spinner, but I’m letting the majority of the water drip off, then I’ll take it outside. If you need a washer for one or two people, this is a great Answer. I talk about my Panda below, after I describe my plunger and 5 gallon bucket washing.

If you’re single or part of a couple, and presently going to the Laundromat, I think you’d love the Panda. It’s super nice to be able to wash at home, and in no time it pays for itself.

Plus, manually choosing how many rinses you do ensures a super clean wash.

During spring, summer and fall I use the sun to heat water for washing. How? I have a “drinking water safe” hose that’s placed so that the sun shines on it and heats the 100 feet of water. 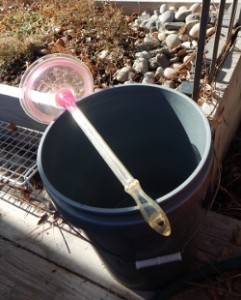 I put bio-degradable washing powder in a 5 gallon grey bucket from Lowe’s that looks sort of “stainless steel”, then I fill with however much hot water is needed for the items I’m washing.

To agitate my clothes, sheets, etc., I use a pink plunger ~ the cheapest one on Amazon when I was looking.

After the wash, and each rinse, I pour the water into a drain next to my deck that directs the water under my raised bed. The system is Great.

Finally, I hang things on a bit of trellis I no longer use for plants.

The funny thing is, when I got solar, I was in fact saving my money for a large, front loading washer so I could wash my large comforters at home. Then PNM shut off my heat and lights, refusing to give me two days to transfer money, and knowing full well I had no phone without electricity, to use to call for help.

At first, I would have begged to have their electricity again, despite their aggressive, mean ways. But it was the Wednesday before Easter. By the following Monday I’d survived and decided I would get solar electric and not pay PNM since they had appeared to not want the money as much as they wanted to punish me for being poor.

That was the Best decision Ever.

I’m off grid now, and haven’t missed PNM at all.

But, washing during winter is more tricky. Washing itself is easy, except that tipping a bucket of water over the edge of the deck is replaced by pouring into the kitchen sink, which involves lifting. The decided downside is that drying indoors tends to lower the temperature, which is not ideal in winter.

1/28/2015 ~ A search on Amazon for “small washer” surprised me with an abundance of results. The best option appears to be the Panda Compact Washer/Spinner for just over $200, including shipping, but the dimensions restrict me using it on my kitchen counter. Which is probably a good thing. My kitchen is fast becoming squashed for space.

There are washer/dryer hookups in an alcove off the hallway to my bathroom. I’ve been using the alcove for potting, which I love… Maybe I can arrange everything so that it can be a mud room, in the soil sense of the term, combined with a laundry room.

I wonder what kind of LED light I can add, to take away the dingy look, not referring to the soot but the shadowy nature of the windowless alcove. We’ll see. 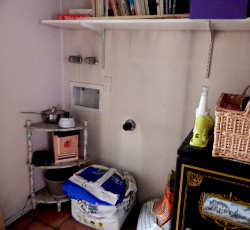 The shelves on the back wall of the alcove are causing me some concern. For awhile I feared I would not be able to order the washer, which I very much desire.

Right now I have to hire someone to go to the laundromat for me, which makes washing cost $40 a shot, that’s including quarters. The cost isn’t prohibitive, given the value of clean clothes, but often I can’t find someone to hire.

So, back to looking at my alcove and taking measurements.

In the lower right hand corner of the picture you see a fridge I bought from Sears eons ago. It looks like a safe. It’s cute. I like cute. 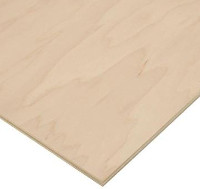 The top of the fridge isn’t quite large enough to hold the Panda Washer, but I think it will be easy enough to add a wood “table top”. In fact, the quickest of searches on Home Depot provided this maple veneer which can be ordered and comes in a 2 foot square size. One reviewer posted pictures of things he made using it which were… quite spectacular. I’m hoping for a nice look, quite a ways this side of spectacular.

I’ll have to find something else I can use for my basket of clean clothes, but that seems easily doable.

The little corner shelves will most likely have to start living in the garage. It’s not really performing any significant function where it is, anyway. The ladybug house, on the second shelf should have gone outside last year, but I wasn’t sure where to put it.

The next serious question is … what length of washer hose should I order. 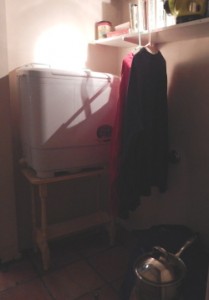 2/19/2015 ~ Okay, my mudroom/laundry didn’t turn out totally Cute, the way I wanted, but it’s okay… and the washer works really well, except it shakes a lot. I’m going to have to find a much more sturdy table for it. I couldn’t use the little fridge because it made the washer too high to easily use.

For the washer’s 33 pounds, a chrome cart would be ideal. But, the shaking might destroy the thin thread that holds the shelf supports in place.

Today I placed a long flannel gown, like one I washed yesterday, in a fine mesh laundry bag. I put a long sleeve tee in another bag. Together the two items, each in a laundry bag, caused a lot less shaking. I still had to hold the machine to keep it from jerking the table the way it did yesterday ~you can see that the table is not really meant to withstand a lot of stress.

Tomorrow I’ll try three things, each in a laundry bag.

I like the light. It’s from the flashlight that came with some battery saws and drill that I ordered from Home Depot . There are two batteries, so I can quickly replace one when the light goes out. 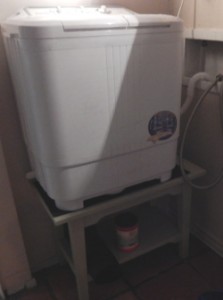 The new table from L.L.Bean far better. It’s much stronger, than the old one. Now there’s hardly any movement when the machine is washing.

You can barely see my stainless hose for the washer. I think it was a good buy. I can rely on it.